Despite the ongoing apple pressing, I sallied forth in late September to mainland Europe to attend two cider festivals whose previous generous invitations I had been obliged to turn down. Flying was out of the question as I needed to bring ample stock. So with my recently serviced 17 year old Land Rover and its new clutch I loaded cider, suitcase and stand and set off. What could go wrong?

Having opted to hop over to the UK to get the ferry to Spain it was on the M4 motorway I noticed a rather pungent whiff of burnt oil. A cursory inspection of the undercarriage at the next service station showed a drive shaft, gear box, transition box and tow hitch dripping with oil. After some techy phone exchanges with the mechanic in Cork I ended up in a small garage in deepest Uxbridge. Whereupon it was discovered that the mechanic had put double the amount of prescribed oil into the gear and transition box. This had burst the seals and therefore to continue onwards my only option was to climb under the car every morning and re-fill said gear and transition box. This was clearly going to be an interesting trip!

I’m glad to say the ferry from Portsmouth to Santander was entirely uneventful and before I knew it, with a lot of apprehension, I was hurtling along the Spanish motorway to my first destination, Gijon (or Xixón in the native Asturian tongue). 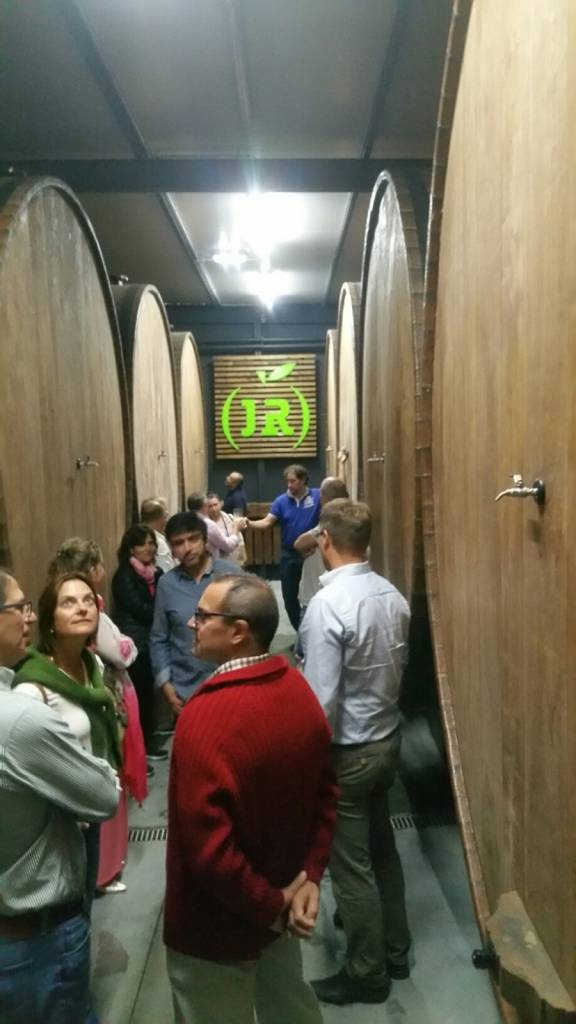 Gijon sits on the northern coast of Spain and is one of the major cities of the Asturian region. Whilst we hear a great deal of the inclinations for independence in the Basque and Catalonian regions there is little talk of Asturias. However, it is fascinating to note that between the two world wars Asturias was accepted into the League of Nations as an independent country with its own language and also using its own currency. The advent of Franco and the fascists put paid to that. Gijon was in many places largely obliterated by Spanish & German fascist aerial bombardment, which acted as a port of escape for many refugees and opponents of the regime. And indeed up until 20 years ago Asturians were forbidden to speak their native tongue. 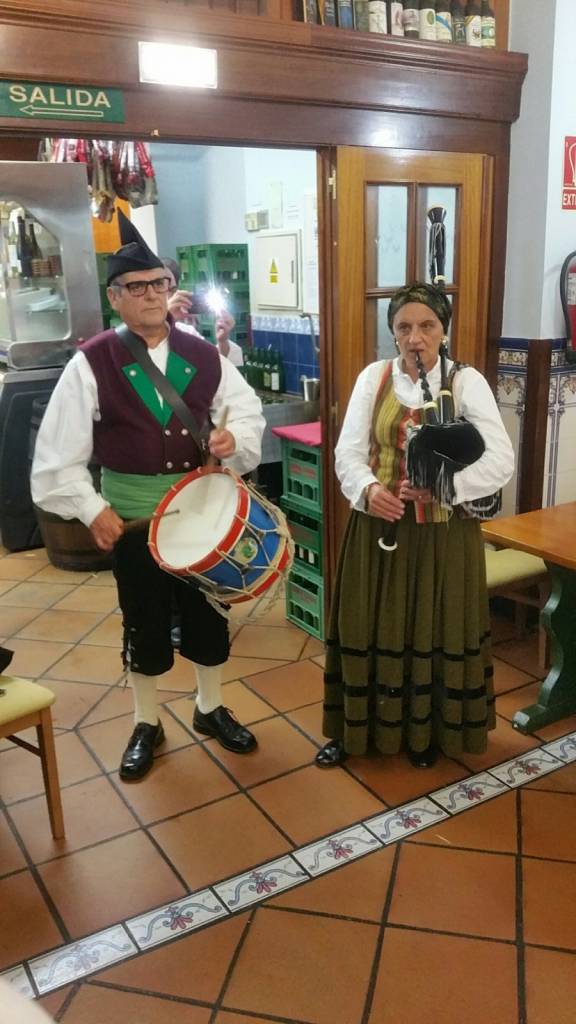 No wonder then that there is a strong nationalist under current and an integral part of that identity is Sidra! (cider). At its peak in 2009, Ireland consumed 16 litres of cider per capita. Across the Asturian population of 1.1m this averages 45 and in the city of Gijon where consumption is highest, that rises to 65 litres of cider per head per annum.

Now you’d be mistaken if you thought this meant congregations of individuals in the street with large flagons suffering from substantial over consumption. In fact there is an entire ritual, strictly adhered to, that is associated with the serving and drinking of Sidra in Asturias. It’s best to look at the adjoining photos. But to pour Sidra correctly one must stand with the pouring arm extended and straight directly above the head in such a fashion that the bottle is not “choked”. Thereafter, without looking at the bottle it is poured into the glass held directly underneath just below waist level. Only a small quantity is poured and the impact of the Sidra on the glass’ edge causes the break out of carbon dioxide making the drink ready for immediate consumption. And if you go into any of the many Sidra bars in Gijon this is the way it is poured – without exception. Believe me, it’s harder than it looks! 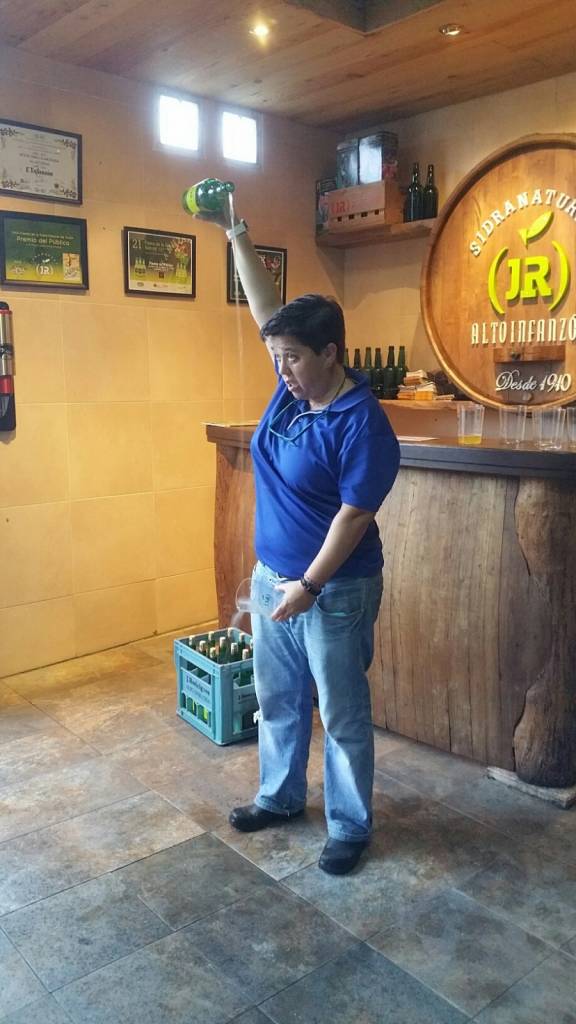 Having tried to master the pour the week-end then progressed at a clip. The following day involved the judging of the cider competition and the gala dinner. Asturian they may be but like the rest of Spain they eat late. The starter arrived at 10.30 p.m.! That said I was delighted that we garnered an award for our medium dry cider. 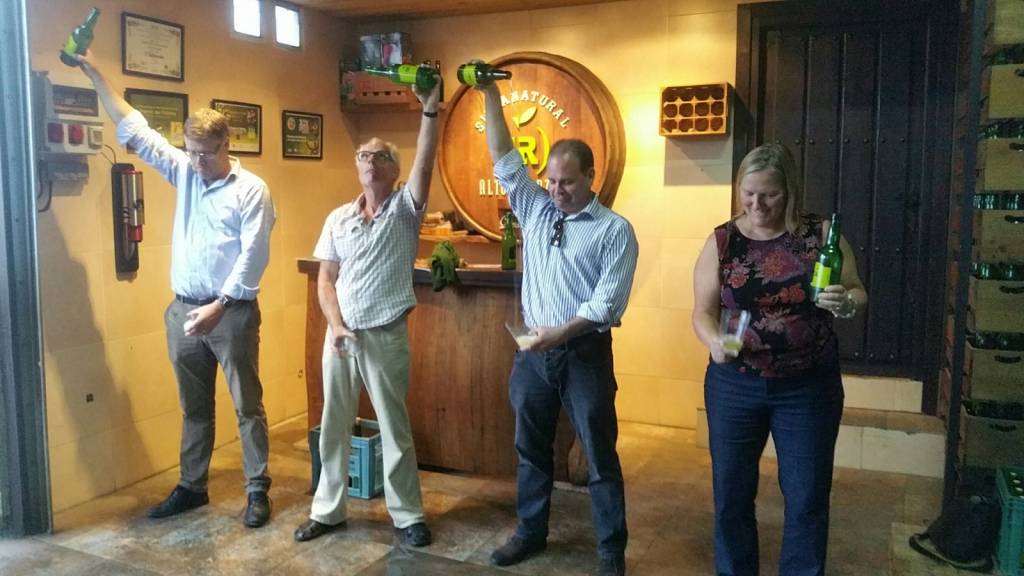 Midday the following day saw the kick off of the cider tasting, open to all comers in Gijon and it was great to be flanked by some excellent cider makers and familiar faces, Craig from Smiling Dog, Alvar from Jaanihanso Cider, Gianluca from Maley Cider and many more. At the end of the day the great news of our success as Supreme Champion in the Dingle festival was ringing through and so I retired exhilarated but exhausted. Xixón and the hospitality of our hosts left an indelible mark. Asturians take their cider seriously and that’s manna from heaven to me.